Accessibility: please note that the neighbourhood plan documents are written by the communities. The documents are not developed by nor under the control of the councils and are therefore exempt from the accessibility regulations. However, we aim to make documents accessible, and look to work with parishes as they are being prepared to make them accessible.

What is neighbourhood planning?

A Neighbourhood Plan must be broadly consistent with the Local Plan for the district, and must be in general conformity with the strategic policies in the Local Plan.

It is not a legal requirement to prepare a plan but a right, which communities can use to shape the future of their neighbourhood. There are national regulations that set out how a neighbourhood plan must be prepared and grants available to help local communities achieve this.

A neighbourhood plan can:

You can find out more about neighbourhood planning by visiting Locality or MyCommunity.

There are currently three adopted neighbourhood plans in Greater Cambridge. 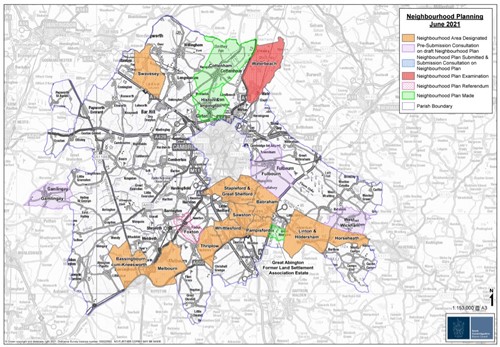 Please read our Support Offer, (adopted July 2018), which sets out how we will support Parish Councils preparing neighbourhood plans.

Further information on how we can support local groups can be found in our statement of community involvement, or by contacting the neighbourhood planning team.

Deciding to produce a Neighbourhood Plan

By selecting continue you are consenting to us setting cookies. Some of these are necessary to make the website function, but others control settings and monitor statistics through Google Analytics. We do not store personal information. If you do not want these cookies to be set, please select 'Cookie settings' to control your cookie settings.