From 9am on 25 May through to 5pm on 26 May, our Public Access system will be unavailable due to essential system maintenance. As a result, you will be unable to view any current planning applications, submit comments, or view historic applications. To submit any comments through this period please email planningcomments@greatercambridgeplanning.org

Residents asked to help shape the future of Greater Cambridge

Residents are urged to give their feedback on the First Proposals for the new Greater Cambridge Local Plan, during a six-week public consultation which has just begun.

Feedback from residents, businesses and groups in the area will help to shape the plan – which will eventually set out how Greater Cambridge will develop over the next twenty years. Online and in-person events will take place over the next month, where residents can discuss the plans with Council officers, and the whole Plan is available for comment online in an easy-to-use format. 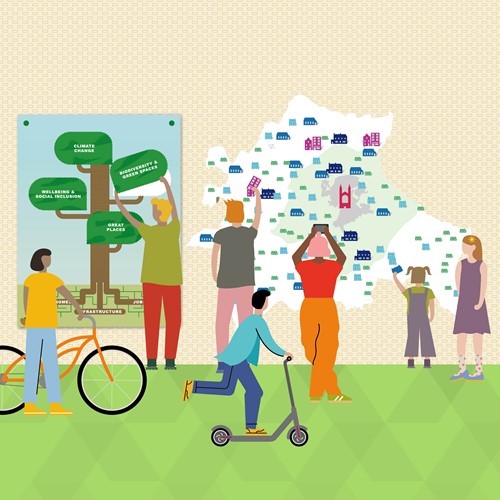 The Councils have set out an ambitious vision for minimising carbon emissions alongside improving the quality of life for residents across the area, with all new homes to be carbon-neutral. The proposals at this stage include 19 new sites for homes and business space, with the majority of extra development proposed for North East Cambridge and the Cambridge Airport site. It sets out a range of new policies to meet the environmental challenges facing the area – including tackling carbon emissions and increasing biodiversity, while highlighting that this can only happen if further work is done to address current water supply issues. Residents can comment using a quick questionnaire, or leave more detailed comments on specific sites and policy proposals.

Cllr Katie Thornburrow, Executive Councillor for Planning Policy and Transport, Cambridge City Council, said: “This stage is critical in setting the direction of travel for the new Plan, so we want to hear from everyone about whether we’ve got it right so far. We know our area faces some big challenges in the future, but also has great opportunities to reduce our carbon emissions and increase the quality of everyday life for our communities. We want new development to provide affordable housing, affordable business space and better community facilities alongside reducing congestion, pollution and carbon emissions.  We think that our proposals can achieve this – but we need your input to make them even better.”

Cllr Dr Tumi Hawkins, Lead Cabinet member for Planning at South Cambridgeshire District Council, said “The new Local Plan is not just about jobs and homes, but recognises the urgency of addressing climate change. It puts forward bold proposals for new green spaces, low-carbon design standards and much more. It looks to a future where we have doubled the amount of land managed to nature, and where development generates as much energy as it consumes through renewable sources. This is a long-term plan and it will have a big effect on everyday life for people growing up and living in the area over the next twenty years. We hope that everyone will share their feedback on our proposals, so we can shape a plan that works for the next generation and beyond.”

37,198 homes are already planned for Cambridge City and South Cambridgeshire between now and 2041. This is through existing Local Plans for the District and City Councils which were adopted back in 2018, existing planning permissions and ‘windfall’ sites expected to come forward. Proposals for the new Plan suggest the additional future housing needs of the area through to 2041 could be delivered through the following sites:

North East Cambridge, Cambridge East and potentially Cambourne are new long-term proposals which would see continuing development after 2041, in order to realise their full potential.

These new development sites are being suggested by the Councils due to the continuing strength of the Greater Cambridge economy as one of the most important research and innovation employment hubs in the UK. Planners say that making plans for fewer homes, when the number of jobs locally is expected to continue increasing, could mean more long-distance commuting and housing becoming more costly. However, the plan strategy is dependent on improvements to the water supply – such as new reservoirs - being achieved without environmental harm and in time to support new development. If the water industry and central government do not take action, the number of new homes proposed may need to be reduced.

The Local Plan consultation is run by the Greater Cambridge Shared Planning Service, the shared service for Cambridge City and South Cambridgeshire District Councils. It is one of a number of important consultations on the future of the area, happening this autumn. Consultations are also taking place over the next two months on transport proposals around the area, run by the Greater Cambridge Partnership, as well as the Combined Authority’s Local Transport and Connectivity Plan.

Aligning with the key themes of the local plan, these proposals seek to reduce day-to-day car trips by providing better public transport, walking and cycling routes, and digital connectivity – all with the aim of getting Greater Cambridge to net zero carbon by 2050. The Local Plan is informed by ground-breaking carbon modelling that has brought together the carbon impacts from transport, construction and everyday use for the first time, and this has allowed the Councils to select sites that minimise future climate impacts.

Consultation opened at 9am on Monday 1 November 2021 and runs until 5pm on Monday 13 December 2021. Visit the local plan page for more details, including online and in-person events.